First, the requisite bit of disclosure. I spent a few months working for an environmental organization dedicated to protecting the boreal forest in Canada. After leaving their employ, I continued to do a bit of media monitoring work for them on contract until a few weeks ago. None of this influences the following post, as far as I can tell, except maybe that I’m more tuned into these issues than the average person.

There, with that out of the way…

I saw a hashtag on Twitter this morning that caught my eye: #savethebou. Based on the tweets I saw, it seemed that the Canadian mint was planning to ditch the caribou that’s featured on the Canadian quarter. I checked a few of the links in the tweets and they all led to a Facebook campaign page. That page had no links back to anything the mint was doing, it was mostly people talking about the stupidity of ditching the caribou and a few people talking about the importance of protecting the actual caribou and its habitat (the boreal forest).

I did a quick Google News search and still couldn’t turn up anything on the mint planning to ditch the caribou image. Finally I tweeted the following: 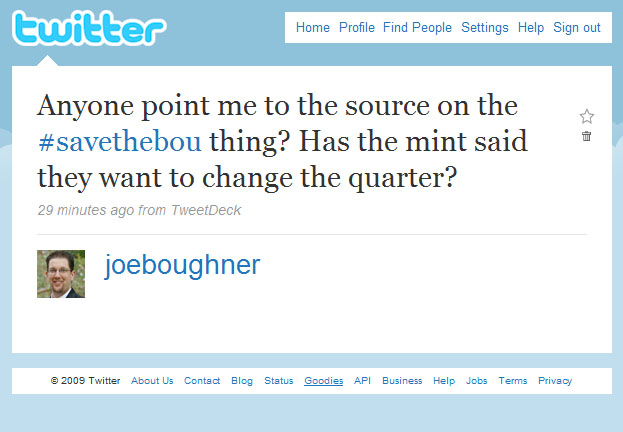 That was met with a quick DM from a social media consultant that’s leading the campaign. The consultant acknowledged that it was a ruse and, in subsequent DMs, said it was an attempt to raise awareness about boreal habitat destruction.

I asked permission to publish the DM exchange here but was asked to wait until the “reveal,” when they come clean about the campaign. Given that it was a DM exchange that this person initiated, I agreed. We can debate the ethics of that later. Suffice to say, the same consultant has since retweeted the deceptive tweet.

In their defence, this consultant told me they come clean to anyone who asks them about it. Since this is done by DM, not in an open forum, I can’t confirm that but I have heard from two other people who were duped by the campaign and aren’t happy about it.

Still, does the after-the-fact transparency justify the tactics? The goal, at least the goal stated to me in the DMs, was raising awareness. My return question was if it’s worth raising awareness if people are going to be pissed off about being misled.

The social media playground is littered with the remains of well-intentioned campaigns that, for one reason or another, went bust. How this campaign ends remains to be seen. However, people are wary of being duped online. I can’t think this is going to help the reputation of social media consultants, who are often seen as more concerned about making a splash than any long-term impacts of their efforts. And I am skeptical that the Facebook petition or ‘grassroots’ Twitter campaign will have any impact if decision makers realize people actually signed on to a totally different (and non-existent) campaign.

I’ve blogged / tweeted / ranted before that raising awareness is a bullshit objective. The issue is  what  you do with the awareness that’s been raised. In this case I’m not partial to that information. But if raising awareness is really the only goal, the organizations served by this campaign should be asking their consultants some tough questions.

UPDATE (Oct 5 @ 3:00 pmish): The big ‘reveal’ took place shortly after this post and now Social Media Group, the org behind the campaign, has posted an entry on their blog soliciting feedback on the ‘teaser campaign’ (their words). SMG’s CEO Maggie Fox (the aforementioned consultant) also laid out their side of things in the comment section.

UPDATE (Oct 6 @ 10:15amish): SMG has posted another entry in which they acknowledge they probably went too far. As vocal as I was in my objection to the campaign, I am impressed by the follow-up post. Kudos to them for owning their mistake.

15 thoughts on “The case of the vanishing caribou: Is awareness-raising a good goal?”